You are here: Home / Home Decor / This 60-Square-Foot Structure Divides and Conquers in a Manhattan Renovation
In a New York loft, a multifunctional cube provides a space-saving fix that’s anything but square.

In cramped New York apartments, it’s not an uncommon requirement for spaces to serve a multitude of functions. To make one 2,000-square-foot loft more efficient, Frame Design Lab came up with a novel solution that does just that within a very tight footprint.

They call it the Cube, a 60-square-foot structure that organizes the larger space by dividing it into a more conventional floor plan. Formerly one large open area with two bedrooms at one end, the interior is now subdivided by the structure into public and private spaces connected by a pair of hallways. 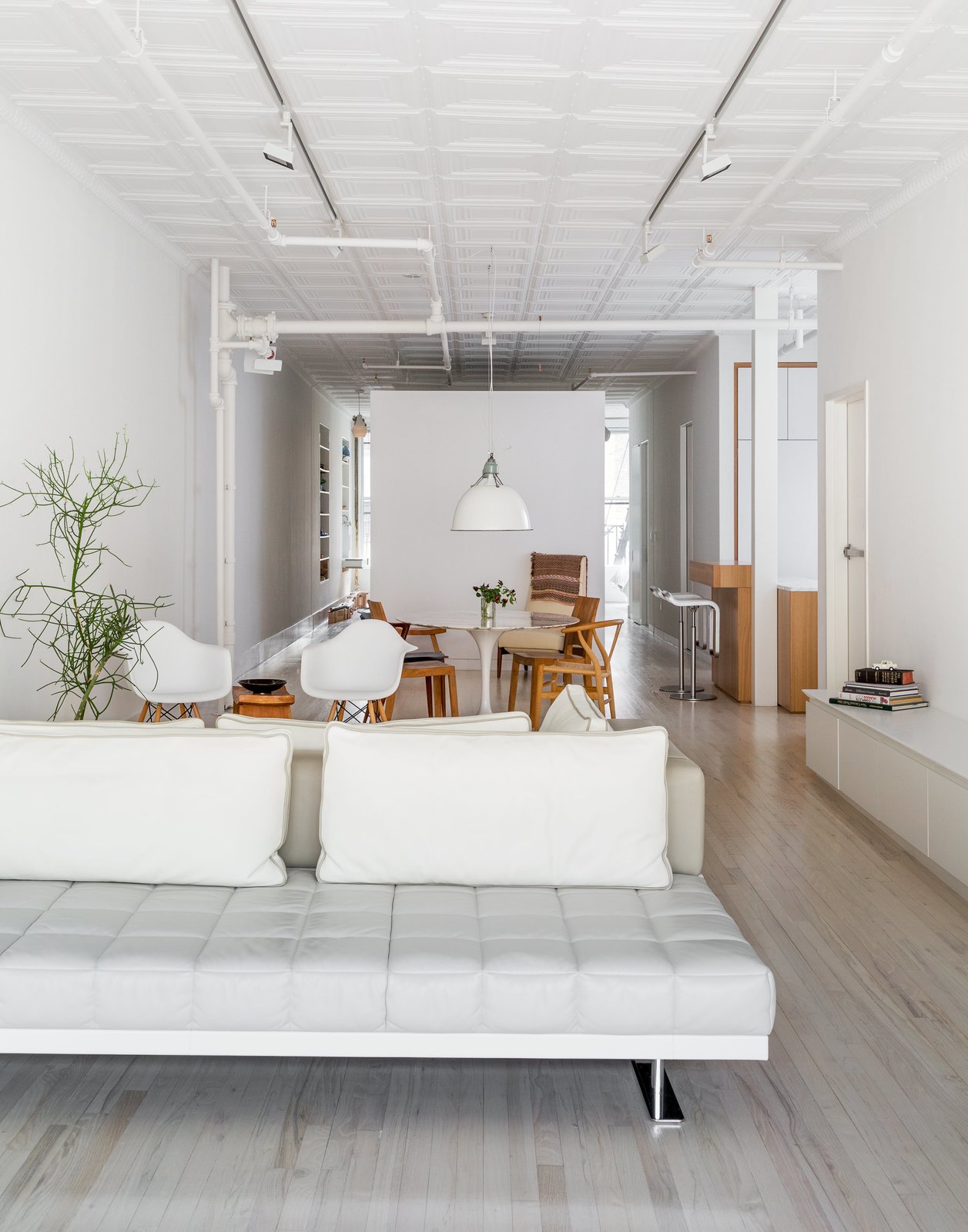 When a Manhattan family approached Frame Design Lab to create a more private master bedroom, they imagined the firm would simply rework a few closet walls. Instead, partners Nina Cook John and Anne-Marie Singer proposed a bold plan to divide the space by adding a 60-square-foot unit in the middle of the floor plan to reorganize the flow.

Originally, Frame’s clients wished to simply move two walls to make a more secluded master suite, but the firm’s iterative approach led to the seemingly illogical idea of creating space by chopping it up with the addition of the structure-within-a-structure. “Our process involves exploring all possibilities, even things that are far out of field, just to say we looked at it and didn’t miss anything,” explains architect Nina Cooke John, who cofounded the firm in 2012 with designer Anne-Marie Singer.

Rather than clutter the master bedroom with furniture, Frame Design Lab created a system where night stands hang from a wall-mounted headboard.

That method led to about 10 initial schematic designs, ranging from conservative to the Cube, four of which were presented to the clients, an artist and a film director with a young son.At first, they were hesitant to embrace the more adventurous option. (“It’s really intriguing, but we can’t do that. We’d be wasting space,” Cooke John recalls the clients saying of the cube-shaped addition.) But after seeing a second round of plans that demonstrated a more ambitious scheme including a kitchen renovation, the couple decided to go all in.

A linear lacquer storage unit with a Corian top helped define the main living areas; now the residents spend more time enjoying the apartment’s northern exposure–one of two main sources of natural light in the floor-through loft.  A custom whitewashed oak mirror, White paint by Benjamin Moore, and a lighting program by Melanie Freundlich carry the brightness throughout the loft. The Grid sofa is by Resource Furniture.

“We love working with different materials, experimenting with how we choose them and how we create interesting details that take advantage of every little nook and cranny,” Cooke John says. In this case, the Cube is made of simple Sheetrock, painted in Benjamin Moore’s White to match the surrounding space. Following a four-month gut renovation, the new Cube serves as a combined guest room, office, and media room, with a space-saving Resource Furniture Swing wall system that doubles as a sofa and bed. Custom details include a niche for books and a built-in desk.

The public spaces are separated from the private bedrooms by the new Sheetrock addition.

To retain the apartment’s loft proportions, the top of the new space does not reach the original tin ceiling; it simply exists within the larger mass. An electric skylight by Velux lets air and light from the wider apartment into the Cube. The result is a minimalist monolith in the center of an updated version of a traditional New York City typology.

“We’ve always liked super modern, clean spaces, which is perfect for these clients,” says Cooke John. “They were willing to go as modern as we would.”